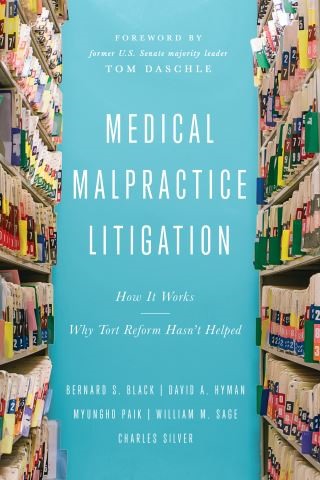 How It Works, Why Tort Reform Hasn't Helped

"Drawing on an unusually rich trove of data, the authors have refuted more politically convenient myths in one book than most academics do in a lifetime."
—Nicholas Bagley, professor of law, University of Michigan Law School

"Synthesizing decades of their own and others’ research on medical liability, the authors unravel what we know and don’t know about our medical malpractice system, why neither patients nor doctors are being rightly served, and what economics can teach us about the path forward."
—Anupam B. Jena, Harvard Medical School

Over the past 50 years, the United States experienced three major medical malpractice crises, each marked by dramatic increases in the cost of malpractice liability insurance. These crises fostered a vigorous politicized debate about the causes of the premium spikes, and the impact on access to care and defensive medicine. State legislatures responded to the premium spikes by enacting damages caps on non-economic, punitive, or total damages and Congress has periodically debated the merits of a federal cap on damages.

However, the intense political debate has been marked by a shortage of evidence, as well as misstatements and overclaiming. The public is confused about answers to some basic questions. What caused the premium spikes? What effect did tort reform actually have? Did tort reform reduce frivolous litigation? Did tort reform actually improve access to health care or reduce defensive medicine? Both sides in the debate have strong opinions about these matters, but their positions are mostly talking points or are based on anecdotes.