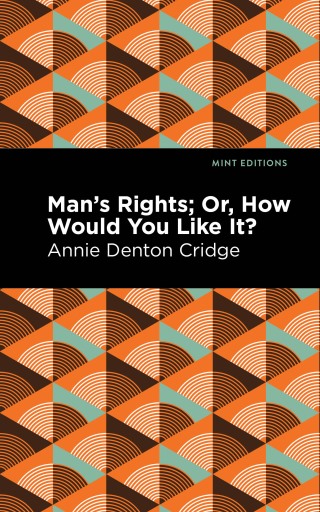 “Cridge ridicules the cult of domesticity by exposing its contradictions, made especially glaring when enacted by men.” –Carol Farley Kessler

Man's Rights; or, How Would You Like It? (1870) is a feminist utopian novel by Annie Denton Cridge. Written during the early stages of the American suffragist movement, Cridge’s novel is a work of political satire that uses utopianism and science fiction to explore the progressive political activism of women of the United States and around the world. Highlighting the absurdity of gender-based oppression, Cridge produced the first feminist utopian novel in history, predating Charlotte Perkins Gilman’s Herland (1915) by nearly half a century.

In a series of strange, prophetic dreams, a woman envisions a society on Mars in which women wield absolute power over men. Unable to leave their homes, made to perform domestic labor each and every day, the Martian men have grown tired of oppression. When technological advancements grant them more free time, they begin staging an uprising against the women of Mars in order to demand total equality. Struck by these visions, the narrator has several more dreams in which she sees a future United States ruled justly and effectively by a woman president. Detailing the reforms and advances of this utopian world, she begins to imagine if one day such a future will finally be possible. Ahead of its time and largely unrecognized upon publication, Annie Denton Cridge’s Man's Rights; or, How Would You Like It? is an important work of science fiction and political imagination that not only sheds light on the nineteenth century women’s suffrage movement, but remains relevant for our own, divided time.

With a beautifully designed cover and professionally typeset manuscript, this edition of Annie Denton Cridge’s Man's Rights; or, How Would You Like It? is a classic of American science fiction reimagined for modern readers.

Annie Denton Cridge (1825-1875) was a British-born American author, suffragist, socialist, and lecturer. Born in England, she emigrated to the United States in 1842 with her brother William. Marrying Alfred Cridge, she settled in Dayton, Ohio, where she published the Vanguard, an influential progressive newspaper. Inspired by the loss of her infant son in 1857, Cridge rejected the Evangelicalism of her youth, embracing spiritualism and undergoing a radical political awakening. She made a career for herself as a writer of innovative stories and novels blending satire, science-fiction, and advocacy for women’s rights. Her most notable work is Man's Rights; or, How Would You Like It? (1870), now recognized as the first feminist utopian novel.