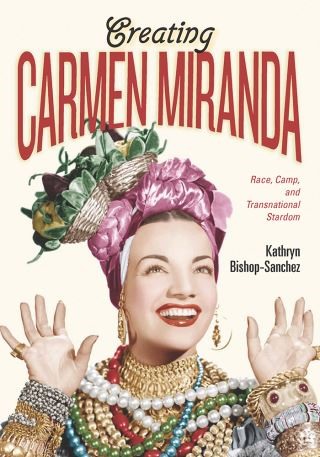 Carmen Miranda got knocked down and kept going. Filming an appearance on The Jimmy Durante Show on August 4, 1955, the "ambassadress of samba" suddenly took a knee during a dance number, clearly in distress. Durante covered without missing a beat, and Miranda was back on her feet in a matter of moments to continue with what she did best: performing. By the next morning, she was dead from heart failure at age 46.

This final performance in many ways exemplified the power of Carmen Miranda. The actress, singer, and dancer pursued a relentless mission to demonstrate the provocative theatrical force of her cultural roots in Brazil. Armed with bare-midriff dresses, platform shoes, and her iconic fruit-basket headdresses, Miranda stole the show in films like That Night in Rio and The Gang's All Here. For American film audiences, her life was an example of the exoticism of a mysterious, sensual South America. For Brazilian and Latin American audiences, she was an icon. For the gay community, she became a work of art personified and a symbol of courage and charisma.

In Creating Carmen Miranda, Kathryn Bishop-Sanchez takes the reader through the myriad methods Miranda consciously used to shape her performance of race, gender, and camp culture, all to further her journey down the road to becoming a legend.