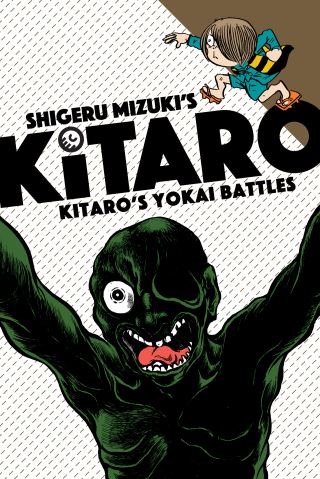 The spooky yokai boy Kitaro is back for his sixth book, and this time he has a pile of monsters to beat! Featuring seven stories by Japan’s beloved monster master Shigeru Mizuki, Kitaro’s Yokai Battles features some of Kitaro’s strangest foes yet—including his good pal Nezumi Otoko who decides that he should be the star of the comic! With friends like these…who needs enemies? But enemies seem to be all Kitaro has. He faces off against villains like the yokai Hoko—who has an evil scheme to corner the market on pickled daikon radish—and the Amifuri Tengu, who always brings the rain. Things get hairy in “The Great Hair Battle,” when Medama Oyaji’s friend Kemedama begs for Kitaro’s help against an attack of giant wigs. The massive mud monster Dorotabo gets down and dirty with Kitaro, and the red-tonged Akashita swoops down from above. These are just a few yokai from the hilarious cast of characters in Kitaro’s Yokai Battles! The seven stories in this 150+ page volume are collected from the late-60s golden age of Gegege no Kitaro. The stories appear in English for the first time in a kid-friendly edition; uncut and unedited, with translations by Mizuki-scholar Zack Davisson. In addition to all these pages of fun, there are bonus features like “Yokai Files,” which introduces the folklore of Japan’s monsters; and the sixth installment of the “History of Kitaro” essay by series translator Zack Davisson. Kitaro’s Yokai Battles is the perfect blend of humor and horror! Translated from the Japanese by Zack Davisson an award-winning translator, writer, and folklorist. He is the author of Yurei: the Japanese Ghost, Yokai Stories, Narrow Road, and Kaibyo: The Supernatural Cats of Japan and translator of Shigeru Mizuki's multiple Eisner Award-winning Showa: a History of Japan and famous folklore comic Kitaro. He also translated globally renowned entertainment properties such as Go Nagai's Devilman and Cutie Honey, Leiji Matsumoto's Space Battleship Yamato and Captain Harlock, and Satoshi Kon's Opus. In addition, he lectured on manga, folklore, and translation at colleges such as Duke University, UCLA, and the University of Washington and contributed to exhibitions at the Henry Art Gallery, The Museum of International Folkart, Wereldmuseum Rotterdan, and the Art Gallery of New South Wales.