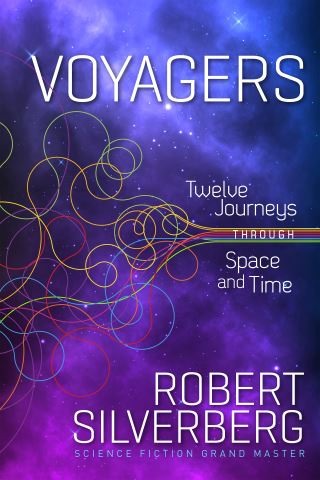 Twelve Journeys through Space and Time

Every science-fiction story is a voyage of some kind—to a world of a far-off galaxy, to our own world of the distant future or the remote past, to some interior corner of the human soul. In VOYAGERS: Twelve Journeys through Space and Time, Science Fiction Grand Master Robert Silverberg collects twelve of his finest short stories and novellas, all of which carry readers to the next level of imagination and into a new universe of the mind. This new collection spans 60 years of work by the Hugo Award-winning Silverberg, traveling from one end of the universe to the other, from the dawn of time to its final hours. A journey through its pages reveals time-travelers from the future come back to witness a catastrophe of our own time, Spanish conquistadores looking for—and finding—the Fountain of Youth, a tourist in Mexico stepping into an alternative universe, and spacefarers among the stars making a surprising discovery. The range of these stories, the kinds of voyages they describe, just begins to demonstrate the scope of science fiction, and the lengths to which Silverberg's sparkling imagination can leap.

Robert Silverberg: ROBERT SILVERBERG is a giant in the sci-fi genre, with four Hugo Awards and six Nebula Awards to his name. He was inducted into the Science Fiction and Fantasy Hall of Fame in 1999 and named a Grand Master by the Science Fiction and Fantasy Writers of America Guild in 2005. At present, there is a resurgence of interest in Silverberg’s short fiction. His short story “Needle in a Timestack” (included in Time and Time Again) is being adapted for the screen by Oscar-winning writer John Ridley (12 Years a Slave).