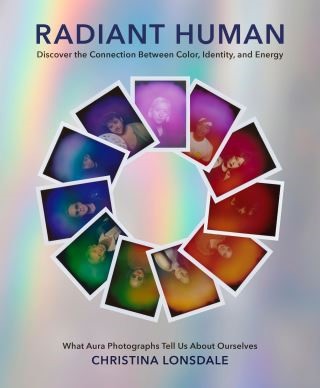 Discover the Connection Between Color, Identity, and Energy

A revolutionary exploration of the relationship between human energy and color, visualized through more than 200 photographs from the “the Annie Leibovitz of aura photography” (New York Times) and a “Dutch painter on acid” (Vogue).

The prodigal daughter of a visionary painter mother and a two-time commune founding father, Christina Lonsdale was raised by her parents on a commune in Taos, New Mexico, at the dawn of the digital age in the 1990s—formative years when science (the advent of the worldwide web, the introduction of the cell phone) and spiritualism (New Age) occupied equal bandwidth. Having her aura photograph taken awoke a passion that combined her spiritual and technological interests (an aura is an energy field emanating around a living being comprised of mental, spiritual, and emotional levels; an aura camera captures the colors of the aura on Polaroid film). With her first aura camera—the Auracam 6000—she began photographing and analyzing family and friends, then in 2014, took her skills and equipment on the road.

Radiant Human includes hundreds of Polaroids selected from the author’s vast archives of some 45,000 images she has taken over a six-year period. The book explores the nature of the human aura, and the notion that aura images may not only capture a person’s essence in that moment, but reveal characteristics of their overall disposition. As Lonsdale describes what all the colors suggest, considering their many variations and nuances, and in relationship to each other. To illuminate her discoveries, she shares her subjects’ stories throughout the book, sometimes accompanied by a single shot, other times by a series of images taken over a period of year. She also includes profiles of well-known people she has photographed including Chloë Sevigny, Joseph Altuzarra, Busy Philipps, and SZA.

Lonsdale makes clear that we are not just physical bodies, but collections of energy as well—giving consideration to the relationship of how we present ourselves to the world and who we are as well as the potential reality of the space in between. Her aura work is a study of humanity, and the energy we radiate and receive—the good, the bad, and the weird vibes—helping us understand better who we are.

Christina Lonsdale is a conceptual artist who came to prominence through her photography lab, Radiant Human, where she utilizes the Aura Camera to read people’s auras, a discipline that shores up the distance between New Age self-discovery and New Media self(ie)-actualization. Dubbed “the Annie Leibovitz of aura photography” by the New York Times and a “Dutch painter on acid” by Vogue, she has been an artist in residence at the Whitney Museum of American Art, shot aura photographs on site at the Museum of Contemporary Art Tucson, and worked with numerous brands including Nike, Google, Nordstrom, Refinery29, and Urban Outfitters. Her work has been featured in the New York Times, Vanity Fair, W, ID, Vogue, Teen Vogue, Harper’s Bazaar, Nylon, and Time Out. She lives in New York City.