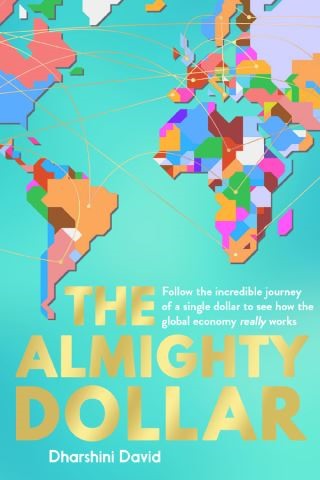 Have you ever wondered why we can afford to buy far more clothes than our grandparents ever could ... but may be less likely to own a home in which to keep them all? Why your petrol bill can double in a matter of months, but it never falls as fast?Behind all of this lies economics.It's not always easy to grasp the complex forces that are shaping our lives. But by following a dollar on its journey around the globe, we can start to piece it all together.The dollar is the lifeblood of globalisation. Greenbacks, singles, bucks or dead presidents: call them what you will, they are keeping the global economy going. Half of the notes in circulation are actually outside of the USA - and many of the world's dollars are owned by China.But what is really happening as our cash moves around the world every day, and how does it affect our lives? By following $1 from a shopping trip in suburban Texas, via China's central bank, Nigerian railroads, the oilfields of Iraq and beyond, The Almighty Dollar reveals the economic truths behind what we see on the news every day. Why is China the world's biggest manufacturer - and the USA its biggest customer? Is free trade really a good thing? Why would a nation build a bridge on the other side of the planet?In this illuminating read, economist Dharshini David lays bare these complex relationships to get to the heart of how our new globalised world works, showing who really holds the power, and what that means for us all.

Dharshini David: Dharshini David is the BBC’s Economics Correspondent, providing coverage of the subject across national TV and radio and online. She also presents business news for BBC Radio 4’s flagship Today programme. She started her career as an economist in government, and was subsequently HSBC Investment Bank’s UK Economist. She left the trading floor to cover financial stories for the BBC in London and went on to present Panorama and the BBC’s Wall Street coverage from New York as the financial crisis took hold. She has also presented business and political news programmes for Sky News, including the flagship Sky News Tonight show alongside Adam Boulton. During her career, Dharshini has also advised Tesco's board, and its then CEO Sir Terry Leahy, on broadcast media strategy, acted as an economic consultant to Daiwa Bank, and sat as a non-executive member of one the Financial Conduct Authority’s boards. She is the author of The Almighty Dollar (Elliott & Thompson, 2018) which explains in accessible terms the economic foundations that underpin the modern world.