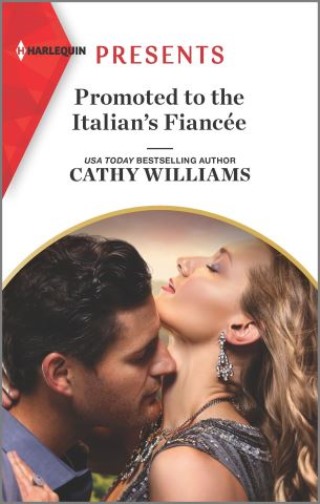 Promoted to the Italian's Fiancée

A fiery fling turns into so much more in this fake engagement story by USA TODAY bestselling author Cathy Williams.

A fantasy fling…
…until she’s wearing his ring!

Heartbroken Izzy Stowe runs to sunny California to reconnect with her past—and immediately finds herself in a business standoff with tycoon Gabriel Ricci. The devastatingly handsome bachelor is ready to bargain—if she becomes nanny to his daughter!

Despite their heart-racing encounters and rapidly growing connection, Izzy can’t risk another betrayal—she’s determined to keep her emotions at bay! Until she’s promoted from nanny to Gabriel’s fake fiancée! And accepting his proposal starts to blur the lines between passion and reality…

From Harlequin Presents: Escape to exotic locations where passion knows no bounds.

Cathy Williams: Cathy Williams is a great believer in the power of perseverance as she had never written anything before her writing career, and from the starting point of zero has now fulfilled her ambition to pursue this most enjoyable of careers. She would encourage any would-be writer to have faith and go for it! She derives inspiration from the tropical island of Trinidad and from the peaceful countryside of middle England. Cathy lives in Warwickshire her family.