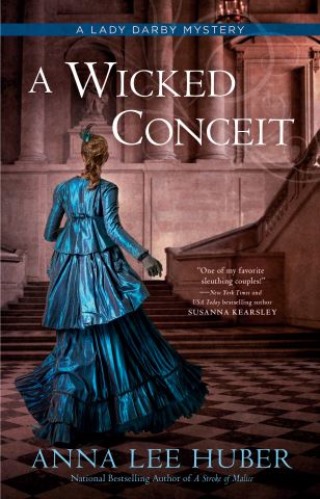 Soon-to-be new parents Kiera and her husband, Sebastian Gage, have been hoping for a respite from their inquiries, but murder and mayhem have a startling way of dropping into their laps in the all-new historical mystery in this national bestselling series.

Edinburgh, Scotland. March 1832. Kiera and Gage have been eagerly awaiting their bundle of joy but trouble has been brewing in the form of the roguish criminal Bonnie Brock Kincaid. A new book and subsequent play features some of Kincaid's daringly heinous exploits, although he swears he had nothing to do with it or the characters which are obvious representations of Kiera and Gage. While the scoundrel's fury seems genuine, as well as his determined quest to uncover the real identity of the author, the Gages still hold doubts about his innocence.

A rash of crimes break out across the city, seemingly inspired by the play and book. When the publisher is found brutally murdered--in an imitation of a gruesome scene--the finger not only points to Bonnie Brock as the possible culprit, but also the Gages, who have been outspoken in their condemnation of the tale. Now, the Gages are on a hunt to unmask the killer. Between the infamy garnered by the play, the cholera outbreak still wreaking havoc throughout the city, and the impending birth of their child, they will need all the resources they can garner.

But family quarrels and the revelation of a secret Kiera has been keeping from Sebastian threaten to undermine everything they have overcome. When they find themselves in the crosshairs of the killer, trapped in the squalid underground vaults of the city, they will soon discover that the truth does not always set you free, and death can lurk around any corner.